Wigan is a town in Greater Manchester situated roughly halfway between Manchester and Liverpool, both less than 20 miles away.

However, most locals consider themselves to be Lancastrians rather than ‘mancs’ or ‘scousers’.

Many also speak (speyck) with a strong local dialect known as Wiganese. To help you to converse with them, check out the local dialect and phrases.

Both the Leeds-Liverpool canal and River Douglas, known affectionally as ‘the Duggie’,  runs through the town centre.

Myth: Wigan Pier was made famous by George Orwell in his book ‘The Road To Wigan Pier’. However, it is actually not a pier but a wharf on the Leeds & Liverpool Canal. It was restored as one of the UK’s top heritage attractions, winning 15 national tourism awards for its portrait of local life at the turn of the century. Sadly now closed but the ‘pier complex’ is in process of being re-developed.

Myth: Wiganers are called ‘Pie Eaters’. Sadly, this is not because of their love for the local delicacy (which happens to be true) but because of the general strike of 1926 when striking miners were starved back to work by the Government and were said to have been forced to eat humble pie.

Wigan is sporty: Wigan Warriors are the most famous and successful rugby league club in the country whilst ‘little’ Wigan Athletic won the FA Cup in 2013 (beating Manchester City) and spent several years mixing it with the big boys in the Premier League (2005-2013). The World Pie-Eating Championship has been held in Wigan ever since it was inaugrated in 1992.

Wigan is also the birth place of Uncle Joe’s Mintballs which have kept local dentists in business for nearly a 100 years now!!

Wigan Casino was a fabled night club that back in the 1970’s spawned the Northern Soul culture, where obscure American Soul records were turned into cult classics and people from all around the country went to dance the night away – literally ‘all night’. The Casino closed in the early 80’s. The site is now a massive shopping centre opened in 2007. 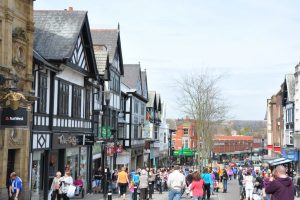